“Some journeys in life can only be traveled alone” – Ken Poirot. 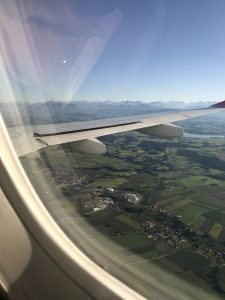 Traveling alone is something that many people say you should experience before you die. I was lucky enough to experience it at the age of 21 in 3 separate European countries. Hi, my name is Shea Roblin, and I am a senior in the Honors Program at AB. I have been a member since the spring of my freshman year, and I studied abroad during the fall semester of my senior year, which was in 2019. I went with the AB Semester in Europe program, which sends us to Salzburg, Austria, for classes and allows us to travel out from there. I had a lot of fun when I studied abroad with my eight classmates, but my most memorable weekends were when I traveled alone.

On the midterm break, I was fortunate enough to have my family join me in Europe for 10 days. They flew into Barcelona and then Munich before I met them in Venice, Italy. To get to Venice from Salzburg was a 6-hour train ride, so I got my first taste of ‘traveling’ alone within Europe. I packed my bags for my week-long vacation and headed to the train station alone – both nervous but excited for my new adventure. It was relaxing to be alone on both train rides, and I headed south since I didn’t have to wait for anyone else. I could get whatever I wanted to eat or sit wherever I wanted without worrying about what my friends wanted. 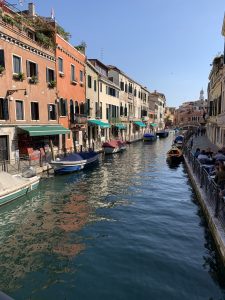 Italy, of course, was amazing. Here you can see a picture of a canal that I found as I was waiting for my family to arrive. It was so fun to walk around somewhere that I had never been and be there in the moment. Altogether, I was alone for a 6-hour train ride and then 2 hours in Venice.

My next adventure was a little more alone than just an afternoon alone. I had the intention of going somewhere in Scandinavia while I was in Europe since most of my ancestry originates there. When I expressed this to my classmates, nobody wanted to come with me since it was so far, and a lot of people were tired of traveling by this point (November). I was dead set on traveling every free weekend that I got. I took the initiative to go alone for an entire 4-day weekend. I ended up choosing Sweden since flights were the cheapest. Sweden and Austria are too far apart to travel by train and back in 4 days while still getting the most of my time there, so flying was the best option. I booked my Airbnb, hopped on a train to Vienna on a Thursday morning, and was soon in the air on my way north by myself. 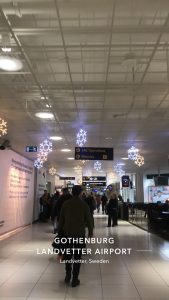 When I got to Sweden, I felt freer than I had in months. I had 4 days entirely to myself in a foreign country, far from my family, friends, and professor. It was a little bit scary but more liberating than anything. First, I had to get from the airport in Landvetter to my Airbnb in Gothenburg, more than an hour away. This was one of the more difficult parts of being alone because I am not usually the person who asks the information desk for help. I had to step out of my comfort zone, figure out where to go and how to get there. Once I finally got into the city, I found my Airbnb and dropped off my luggage, then set out to explore.

This was by far the best part of my entire European experience. I was able to go anywhere whenever I wanted and didn’t have to worry about leaving a friend behind or making them upset. I also didn’t have to compromise and miss out on something that I would have instead done to do something my travel companions wanted to do, which happened on some trips. I planned out my entire weekend on the way to the Vienna airport, and I ended up doing whatever I wanted, whenever I wanted. I ate at the places I wanted and didn’t have to worry about what someone else might want to eat.

The freedom was almost intoxicating. Since I got to Gothenburg so early on my weekend, I ended up doing more than I originally planned at first, so I was ‘ahead’ of schedule. Again, this was another perk of being alone – I wasn’t tired. I didn’t have to go home as early as I might have if I was with people. 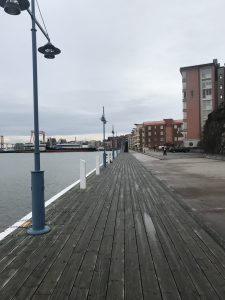 Here is a picture from my second day in Sweden, when I went to the coastline in Gothenburg. I spent this day in museums and restaurants that I wanted to see, as well as just walking around wherever I felt. I ended up fulfilling my academic goals for the weekend (visit one cultural location and one ‘teaching’ location) by Friday, so I changed my plans drastically for my Saturday, and bought train tickets to Stockholm. This was about 3.5 hours each way from Gothenburg, but it was something I wanted to see, especially while I was there. Again, had I been traveling with someone, I may not have been able to have this drastic change in plans with less than 24 hours notice, but since it was just myself, I could do whatever I wanted. 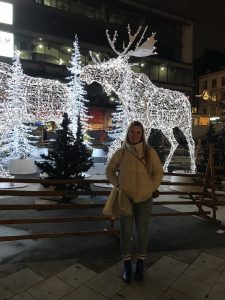 These were some lit-up moose statues I found in Stockholm on my day trip there. Stockholm was amazing in itself, but being alone made it even better. One of the biggest tips I learned was to have maps downloaded beforehand unless you have access to data. I was lucky enough to have data, and it made my navigating so much easier and faster, which helped me see more places. In Stockholm, though I was only there for approximately 9 hours, I saw: the three museums in the Stockholm Palace, the Stockholm parliament, and Globen City. After that, I hopped on a train back to Gothenburg and headed back for my last day. Before I flew back to Vienna on Sunday, I headed into the rain to explore Gothenburg one previous time. A few hours into it, I realized that I was miserable and that I really just wanted to go back to bed until my flight. 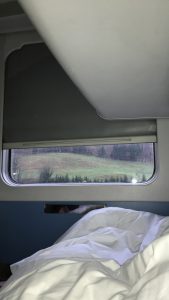 During my last solo experience, I went to Zagreb, Croatia, for two days and two nights. Here you can see my view from my bedroom in a sleeper car of a Croatian train, which I took to get from Salzburg to Zagreb. It took approximately 10 hours due to a delay, but it was okay because I had a bed and some snacks given to me by the conductor. Zagreb was a slightly different experience because I didn’t have data. For the majority of my trip, I was wandering around with no maps or directions. I ended up visiting museums that thankfully had English translations and spending the night in my gorgeous single-person Airbnb.

This picture is of the skyline in Zagreb. One downside for this specific trip was that Croatians don’t speak a lot of English; several places I went I was utterly alone. It was a little lonely, but I chose to view it as peaceful since, again, I had total freedom. My biggest issue was the language barrier, and as a result, I ended up in my room around 4pm for the night and ordered food in. Being alone here was different than my other two trips in that the language barrier was a significant factor. Still, the city was close together and easy to navigate, even without maps or data.

All in all, traveling alone was a very, very eye-opening experience. I learned a lot about myself, such as how late I liked to stay out in a city. I hadn’t known that before since most of my travel partners wanted to retire early. I also learned how to find the things that I would be most interested in, such as museums and restaurants and what order I liked to see them in. It was a lot of fun to shuffle my day around, and with both of my longer trips, I ended up doing everything I wanted to do (and more) even though I didn’t necessarily do them when I had planned to. Another weird, relieving experience happened one day when I walked down the street – I thought, “wow, I really wish I could go back to my Airbnb right now.” Then I realized, why can’t I? It was just me myself and I. It doesn’t sound like a big deal, but after traveling with people for the previous three months, it was nice to be alone at some capacity. Having this space allowed me to reset and have a break from everyone I was living with, which let me work harder on my schoolwork.

If you are thinking of traveling alone, I would highly recommend doing so. This experience was completely different than my experiences going with other people, and my times alone ended up being my most memorable and fun. The two places I went when I was alone are the two I would go back to in a heartbeat, and they gave me the most insight as to what traveling truly should be – a way to explore.